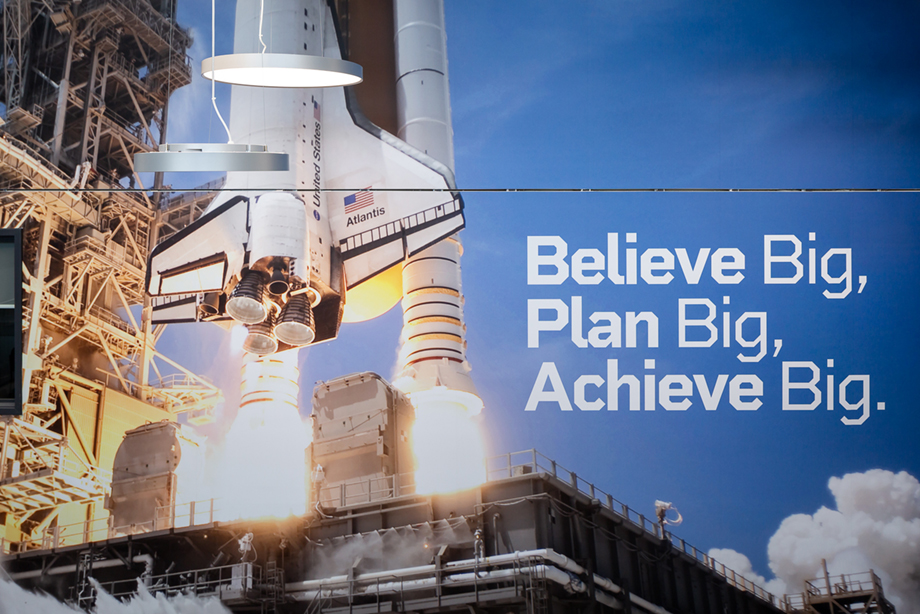 “Women in Space” is this year’s theme for World Space Week.

In fact, over 90 countries are celebrating the achievements and contributions of women in the space sector and sciences.

We’ve featured a number of female astronauts, Mathematicians and Scientists in our bespoke Wall Art for schools. So we thought we’d take a trip down memory lane and revisit some of our favourite featured women!

But, women have made major contributions to the research and facilitation of space travel throughout the decades. So, here we’ll pay homage to some of the wonderful women in space. 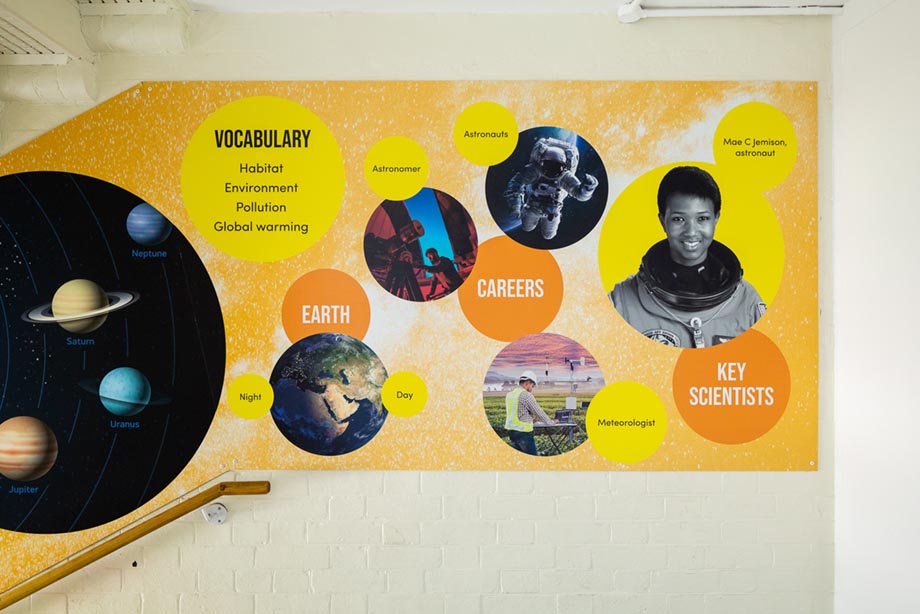 Mae Carol Jemison is an American engineer, physician, and former NASA astronaut. She became the first black woman to travel into space when she served as a mission specialist aboard the Space Shuttle Endeavour.

The design featured other female Scientists like Stephanie Kwolek, the American Chemist. And it gave a well deserved mention of Greta Thurnburg, the environmental activist. 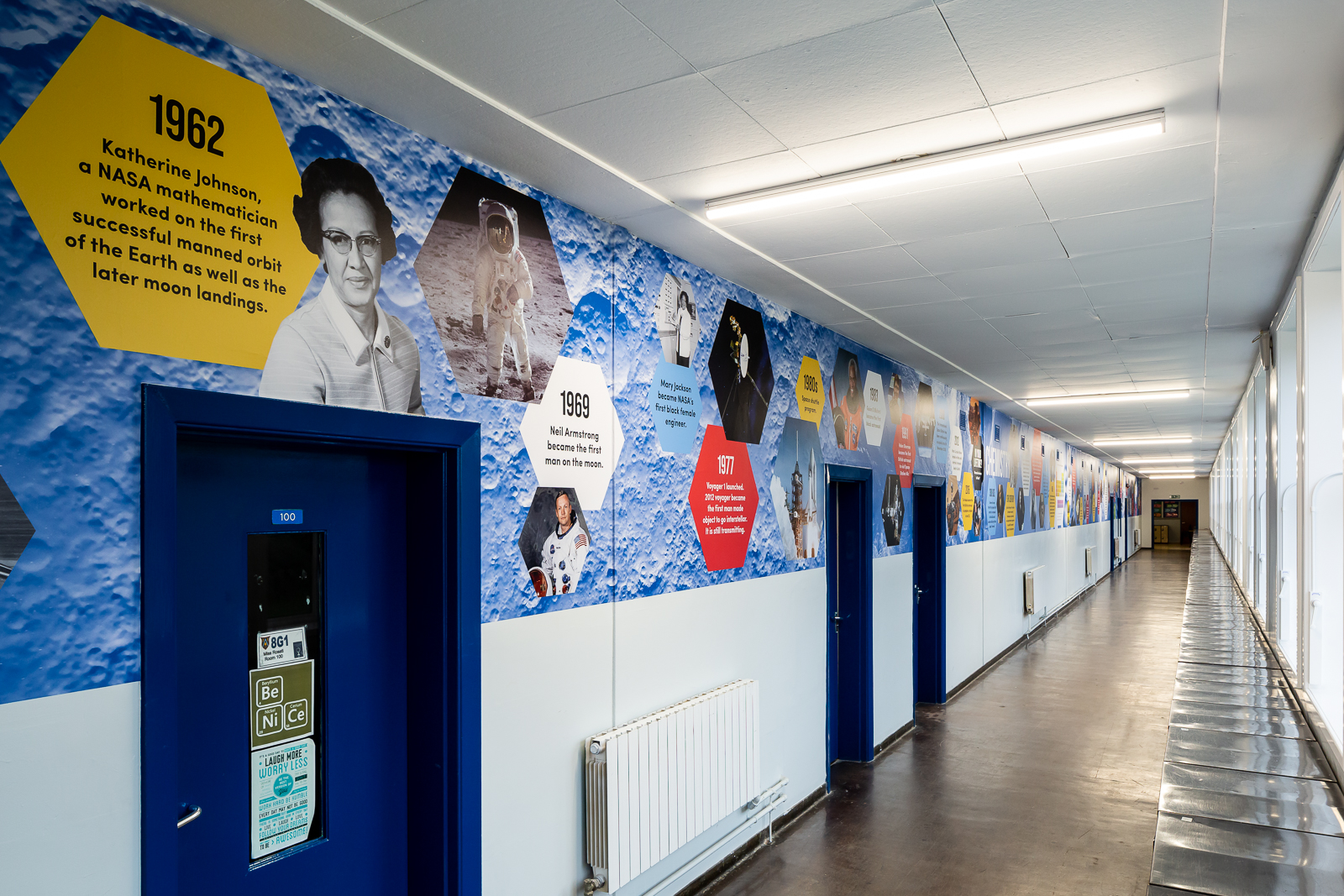 Katherine Johnson was an American mathematician.

Although she didn’t go to space personally, she was instrumental in facilitating the first trip to the moon, and multiple other space ventures. Katherine’s calculations of orbital mechanics as a NASA employee led to the success of many U.S. crewed spaceflights.

She passed away in February 2020 at the age of 101. But her legacy will remain forever.

We were thrilled to feature Katherine in a Wall Art design for Ash Manor School. The design was for a Science timeline that stretches across the school’s corridors.

Now pupils can learn about one of the pioneering women in space research as they make their way between lessons. 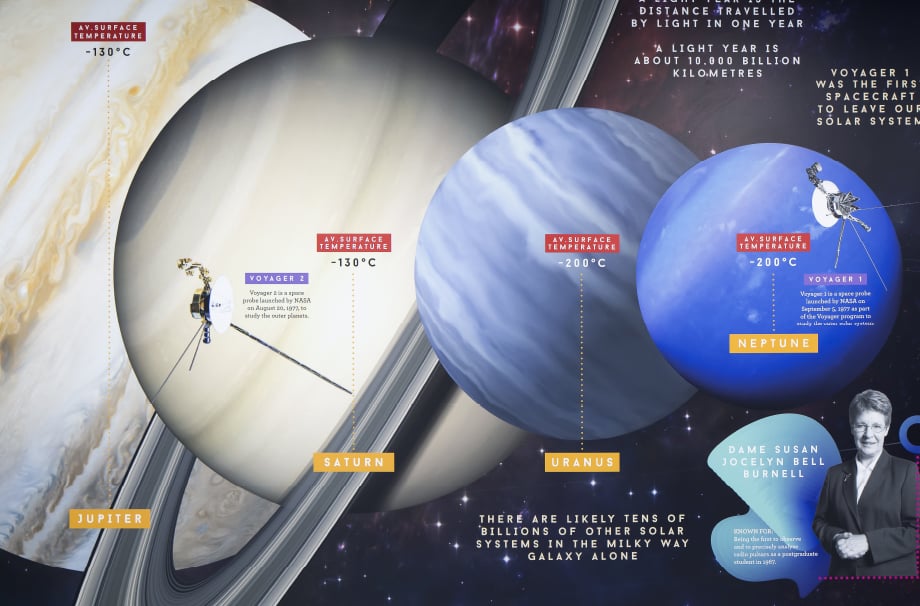 As a research assistant, she helped build a large radio telescope. This led to the discovery of pulsars, as the first direct evidence for the existence of rapidly spinning neutron stars (source: biography.com)

We featured Dame Susan in a Wall Art design for Woodford County High School for Girls. This award-winning high school in London supports young women as they grow into independent, confident and competent adults.

And their investment in Physics Wall Art will inspire learning, invoke natural curiosity and create interest in the field of Physics!

At Promote Your School, we design all types of Wall Art for schools. Every design is created in-house by our UK based team.

And Science is just one of many popular types of Wall Art that schools request. In fact, we design everything from History timelines and large Maps to nature scenes and sports halls. There is no limit to what we can design on your school’s walls!

Get in touch to find out more. And check out our case studies or watch the video below to see more examples of our Wall Art in action! 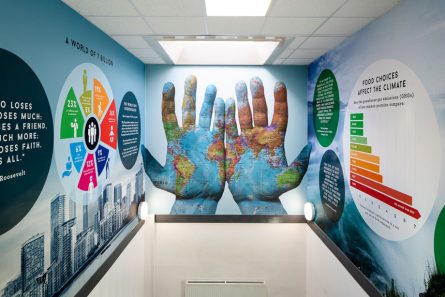 Wall Graphics are becoming increasingly popular for schools all over the world. What are Wall Graphics and why are schools investing in them? In our latest blog, we’ll explain all you need to know and discuss how to transform your visual learning environment. Whether you want to improve learning outcomes, boost morale, support pupil wellbeing […] 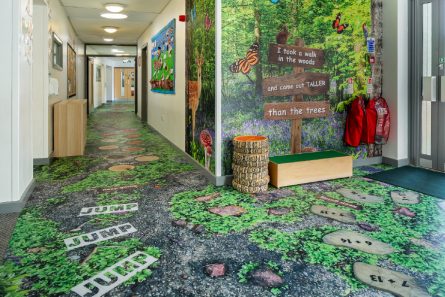 This year’s Mental Health Awareness week focuses on the theme of loneliness. Mental Health Awareness week started over twenty years ago. It serves as a reminder to slow down, think about, discuss and focus on wellbeing. And, as an education agency, we’re taking the opportunity to address the widespread mental health issues affecting our pupils […] 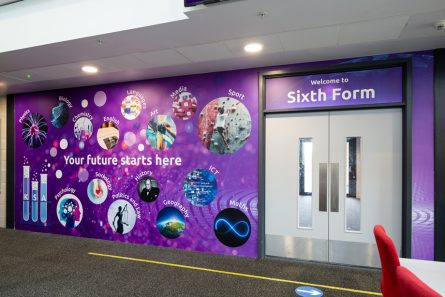